Can I Substitute The Ham Hock

Yes! The ham provides a nice salty/smoky flavor the soup, but there are other types of meat that can do the same job. Bacon is an easy choice. Just brown your bacon in the pot before beginning the soup, remove it from the pot, then add it back in after the soup is finished. Smoked turkey wings also work great and can be used in the exact same manner as the ham hock.

This easy split pea soup recipe comes together quickly, whether you use the stovetop, Instant Pot, or crockpot. You don’t even have to soak the dried split peas. Pick whichever method works best for your kitchen — either way, this is truly the best pea and ham soup recipe!

When five minutes into it the kitchen already smells amazing, you know its going to be good. Split pea soup is an old idea. How old? Split pea soup was sold on the streets of Athens in 500 BC Wow. Its been a nutritious and cheap form of protein and comfort ever since. It came to us here in the States via Britain where it was known as pease porridge. Its a wonderful meal that deserves to be rediscovered.

How To Make Split Pea Soup With Bacon

This recipe is a cinch to make. 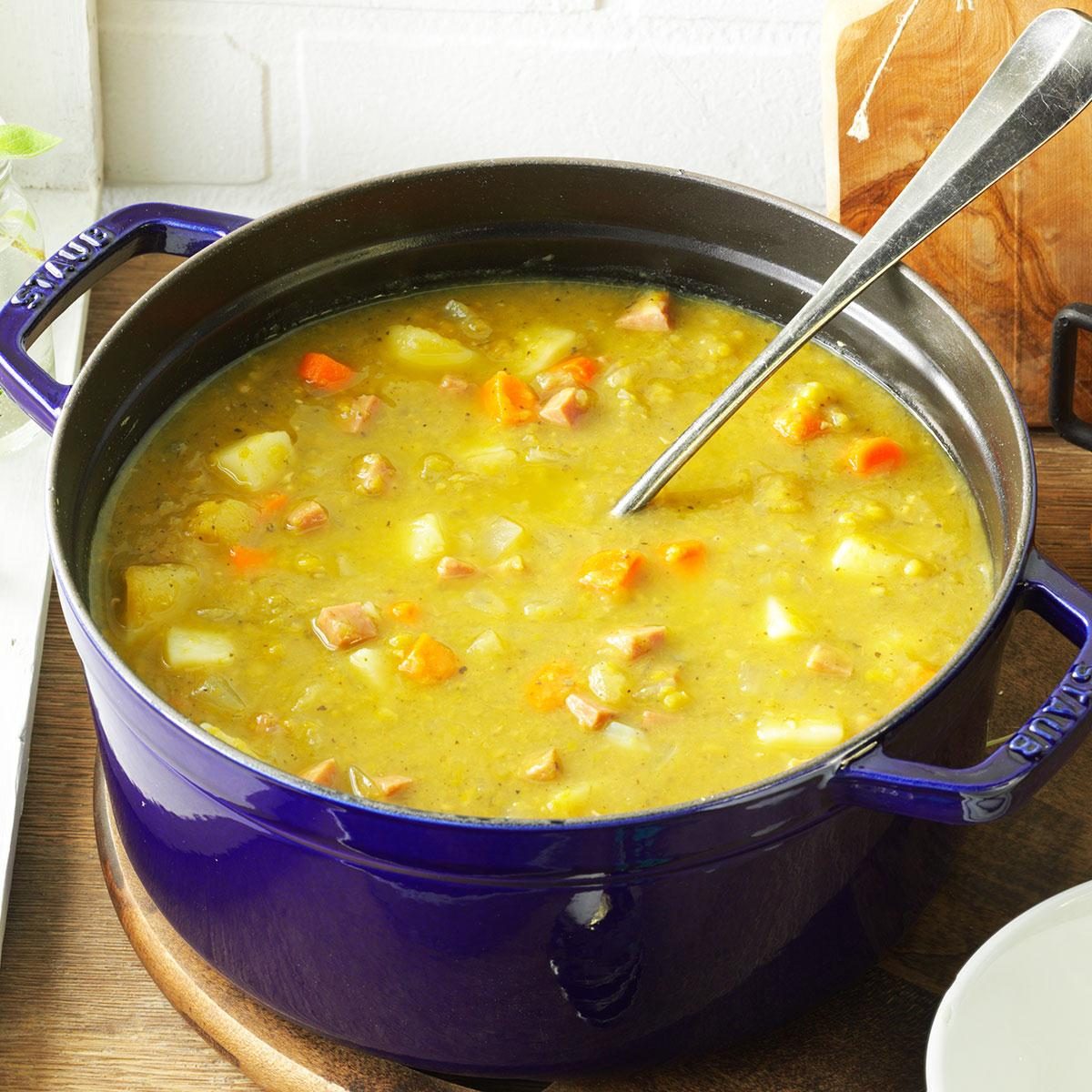 How To Make Split Pea And Ham Soup

Start by rinsing the dried split peas . Once rinsed, set aside.

If you are using ham hocks, ham shank or joint instead of the bone and leftover ham, heat 2 tablespoons of oil over medium-high heat in large Dutch oven or stockpot add the hocks or joint to pot and brown meat on all sides.

Cover with eight cups of water and if desired, add a rib of celery, one carrot, an onion, and some black peppercorns to the pot.

As ham can be salty, dont add salt to the pot at this stage. Once the meat is cooked, you can safely taste the stock and season from there.

Bring to a boil, lower the heat to low and simmer for 2 hours before moving on to making the soup.

Chop the carrots, onion and celery into bite-sized pieces.

Tie the parsley and bay leaf together with kitchen string.

Heat two tablespoons of olive oil in a large soup pot, saute the onions over medium heat until translucent .

Add the garlic and cook another minute.

Add the peas. Followed by the ham bone and a cut of ham .

If you made stock using a ham hock or shank, taste the stock for saltiness before adding it to the soup mixture. If it tastes quite salty, use half stock and half water.

Add the paprika and pepper .

Bring to a boil over high heat. Lower the heat to a simmer cover and cook for 30 minutes. Be sure to stir often as the split peas can stick to the bottom. Stir in the potatoes.

Shred the meat and add it to the soup.

Freeze Some For Later

This soup is very freezer-friendly, so if you cant eat all six servings with about 5 days, make sure to freeze a couple of the servings for later. I like to freeze my soups in single servings, so I can quickly and easily reheat one serving at a time when needed. My favorite containers for this are the reusable blue-top Ziploc containers .

Can I Freeze It

Yes this soup will freeze well.

A. You can often buy a meaty ham bone from sources like The Honey Baked Ham Company. When I filmed the video for this recipe, I called my local store and they were able to reserve the bone for me to pick up the next day.

You can also substitute smoked ham hocks. This cut comes from the bottom of the leg, near the ankle, and adds great flavor to braises and slowly-simmered soups. When the soup is ready, just remove the meat from the bones and shred it.

Ham hocks can be a bit saltier than a ham bone, so adjust your added salt as needed.

We take our pork very seriously here in Virginia, so Split Pea Soup with ham is the only way to prepare this old-fashioned favorite! Don’t even bother trying to make a vegetarian version, because the smoky ham adds so much rich, salty flavor to the dish. Whether you use a Dutch oven on the stovetop, the slow cooker for an easy hands-off option, or the Instant Pot for quick last-minute meals, this simple, hearty soup comes out perfectly every time.

The other great thing about this recipe is that you can use just about any version of ham that you have available. Simmering the soup with a ham bone is a great way to use up the leftovers from a holiday meal! I typically use smoked ham hocks for that classic smoky flavor, which I can easily find in my grocery store year-round. If you prefer, diced ham or even bacon will also do the trick!

Since split peas are mild in flavor, soup made with them can be a little muted. The ham does a lot to rectify that, but a base of aromatics, fresh herbs, and well-flavored stock are equally essential.

I start this soup with a mirepoix softened in butter. For additional flavor, my family also loves adding a couple of minced garlic cloves as well.

Once the vegetables are tender and fragrant, add the peas, ham bone, dried bay leaf, and fresh thyme right into the pot.

Tip:Ham can vary quite a bit in saltiness by brand and preparation. Its best to go light when adding salt to the recipe and adjust to taste when the soup is finished simmering.

How Do You Make Split Pea Soup From Scratch

You can cook this soup on the stovetop, in the slow cooker, or in an Instant Pot, but the process is pretty similar for all of them. To make split pea soup, heres what youll do:

How To Season Split Pea Soup 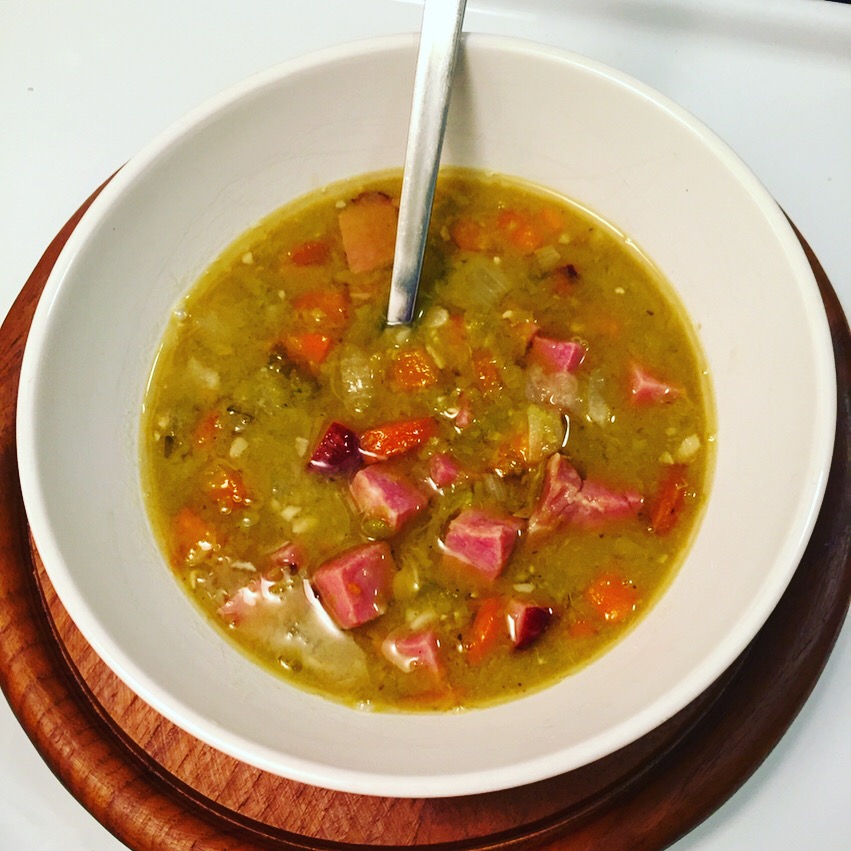 This dish gets a good amount of its flavor from the smoked ham. The recipe also calls for a small amount of thyme, oregano, basil, pepper, and bay leaf. These flavors are subtle, so feel free to adjust the amount of seasoning in your soup, omit some of the seasonings if you don’t care for them, or add different herbs of your choice.

How To Cook It In An Instant Pot:

How to Make Easy Split Pea and Ham Soup | Allrecipes.com

A. Split peas shouldnt need soaking prior to simmering. If they arent breaking down after 90 minutes , a few things mightve happened:

SPLIT PEAS Dried split peas are cheap and easy to find. While they resemble a lentil, theyre actually a type of dried pea. That being said, you can use dried lentils in this recipe !

I choose green split peas because theyre a bit sweeter but you can use yellow split peas if youd like. The cooking time will remain the same.

VEGETABLES Celery, carrots, and a handful of seasonings will flavor the soup. Add a few cloves of garlic if desired. To stretch the soup even further, peel and dice two russet potatoes and add them along with the other vegetables.

MEAT Use up that leftover ham. No extra ham on hand? Use cooked and crumbled pieces of bacon for that smoky, salty punch of flavor.

BROTH In this recipe a ham bone flavors the broth just like in a ham bone soup. If you dont have a ham bone you can use ham hocks .

If you have only diced or leftover ham swap out some of the water for extra broth as the bone is used for flavor.

You May Like: Turkey Burgers With Lipton Onion Soup Mix

This post contains some affiliate links, which means that I make a small commission off items you purchase at no additional cost to you.

In effort to use up some of the things stored in my freezer and pantry, I took a quick survey of what I had available. I had a left over ham hock from making Collard Greens, a bag of chopped celery and bag of chopped carrots from when I made Garden Tomato Soup. And since a nice thick and chunky split pea soup is one of my most favorite things ever, it was an easy decision. )

Pictured with Homemade Croutons on top!

Making it from scratch was a cinch, especially since I already had the carrots and celery chopped, ready, and waiting in the freezer. So, all I had to buy to make this split pea soup was a bag of peas and a potato. Yeah, this weeks grocery receipt was SMALL.

How To Make Split Pea Soup: 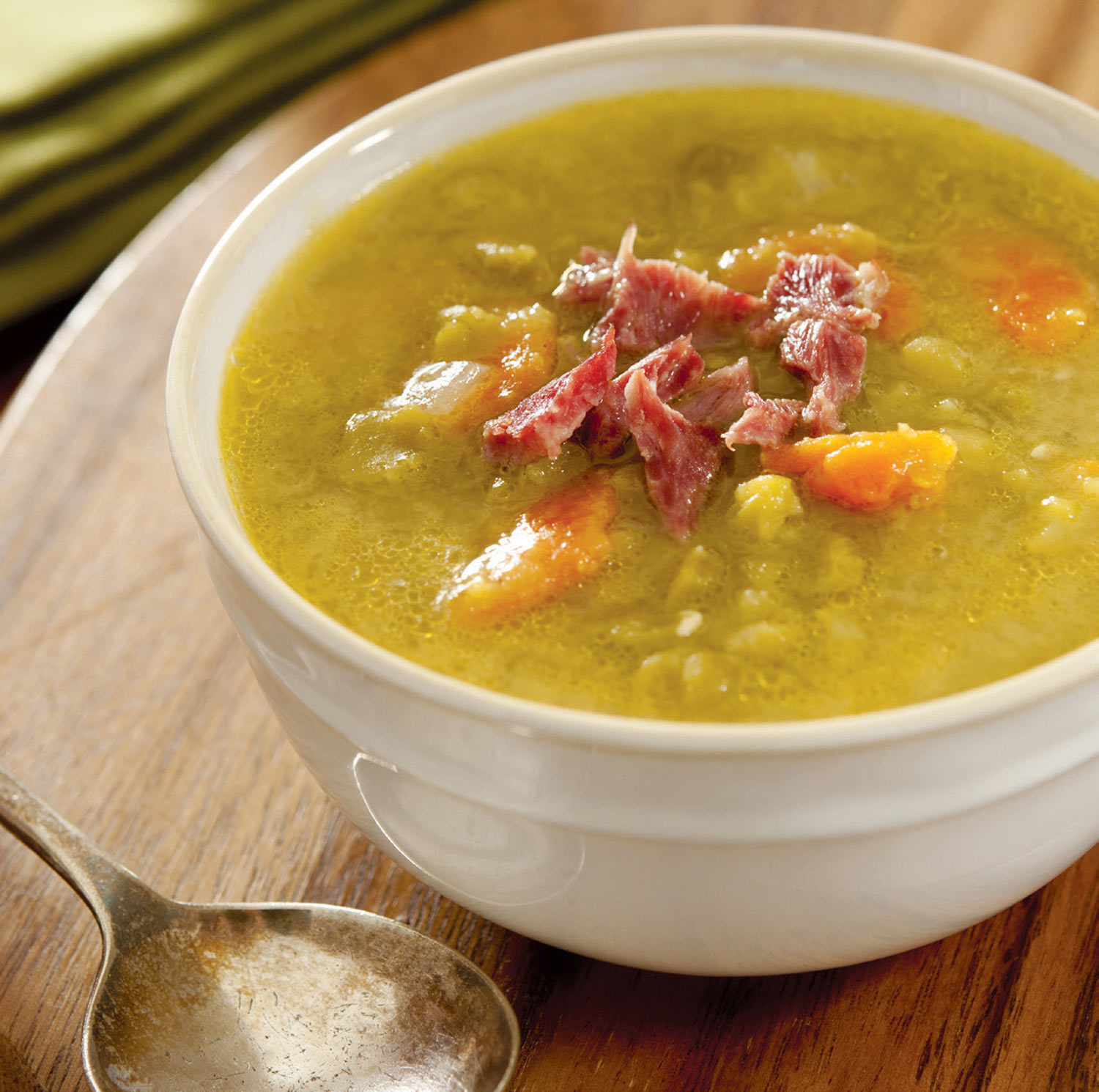 How To Make Croutons

Cook, stirring frequently, until golden brown and toasted, 3 to 5 minutes, then let cool.

To serve, ladle the soup into bowls and top with the fresh croutons. The soup will thicken as it sits on the stove thin it with water and adjust seasoning as necessary.

Split Pea Soup flavored with ham is just like the one you grew up on. Full of vegetables and tender split peas this soup is easy to make and even better to eat. It is hearty and soul warming. Split pea soup is one of those feel good soups thats also good for you. Dont let the color of this incredibly delicious soup throw you. Its vibrant color just means it tastes good and is healthy too. The aroma is unbelievable and the flavor will keep you coming back bowl after bowl.

Split pea soup is one my go to favorites after Ive cooked a ham and have leftovers. Its the perfect way to use the hambone and not let it go to waste. It gives the pea soup just enough of that salty smoky flavor that makes this soup irresistible. The ham also gives it an extra punch of protein and will help satisfy your hunger. Another plus to this recipe is the fact that split peas are so cheap. So if you use leftover ham, its quite a low cost hearty dish. Serve it with a side of rolls and a nice green salad and youve got a meal thats sure to delight!

You May Like: Where Is Lipton Onion Soup Mix In Walmart