With the same aesthetic grace he displayed with Tolstoy’s The Three Questions, Muth here transports a classic tale to rural China. The setting not only allows his evocative, impressionistic watercolors to play over mist and mountains but also affords an opportunity for Buddhist underpinnings. Three monks of varying ages stop at a village where hard times have made people suspicious in Muth’s full-bleed spreads, even the houses appear to look down with disdain. Famine and other hardships have bleached the faces and hearts of the villagers the tea merchant, the seamstress and the carpenter whose closet bulges with hoarded vegetables all appear caught in Muth’s vignettes as if by a photographer’s flash. Only a little girl, her cheerful yellow coat a beacon in the gray landscape, approaches them. She helps them find three smooth stones shown in a close-up, piled and teetering in the harsh winter light . Soon, the pure hearts of the monks move the other villagers to generosity, and cloud ear, mung beans, ginger root and more join the stones in the pot. In the endnote, Muth invites readers to find the Chinese symbols embedded in the art and explains that in the Buddhist story tradition he borrows from, tricksters “spread enlightenment rather than seeking gain for themselves.” And while the tale of “Stone Soup” can be told to make fools of the villagers, here it becomes an offering as generous as Muth’s villagers turn out to be. Ages 6-up.

Before Reading The Story

Ask the children how many of them like soup? What kinds of soups do you like to eat? Hold up the cover of the book and read the title. Ask the children if they can guess what they are looking into? What do you think they will do with the pot? Introduce the story.

Literacy/Book Knowledge & Appreciation demonstrates progress in abilities to retell and dictate stories from books and experiences to act out stories in dramatic play and to predict what will happen next in a story. AND Social & Emotional Development/Self-Concept begins to develop and express awareness of self in terms of specific abilities, characteristics, and preferences.

After Reading The Story

Remind the children that the villagers each shared some of their food to make the delicious soup for everyone. Spend a moment talking about sharing. Point out any acts of sharing that you have recently seen in your classroom . Ask the children to think of a time when they shared with another person. How did it make you feel? How did it make the other person feel? What kinds of things are more fun to do when you share them with another person?

At the end of the story, the villagers said that sharing makes everyone feel richer and happy. As you see children sharing throughout the day, thank them for their generous spirit and thoughtfulness.

Three monks come upon a small famine-ridden and war-torn village in the mountains. They find that everybody here is afraid of them and hiding in their homes. The three monks begin to make stone soup, made of water and three round stones. One by one the monks convince the village people to help them make their soup by sharing their spices, vegetables, and other valuable ingredients. They make a feast for the three monks who have now discovered what it means to be happy.

Read aloud video by Once Upon a Story 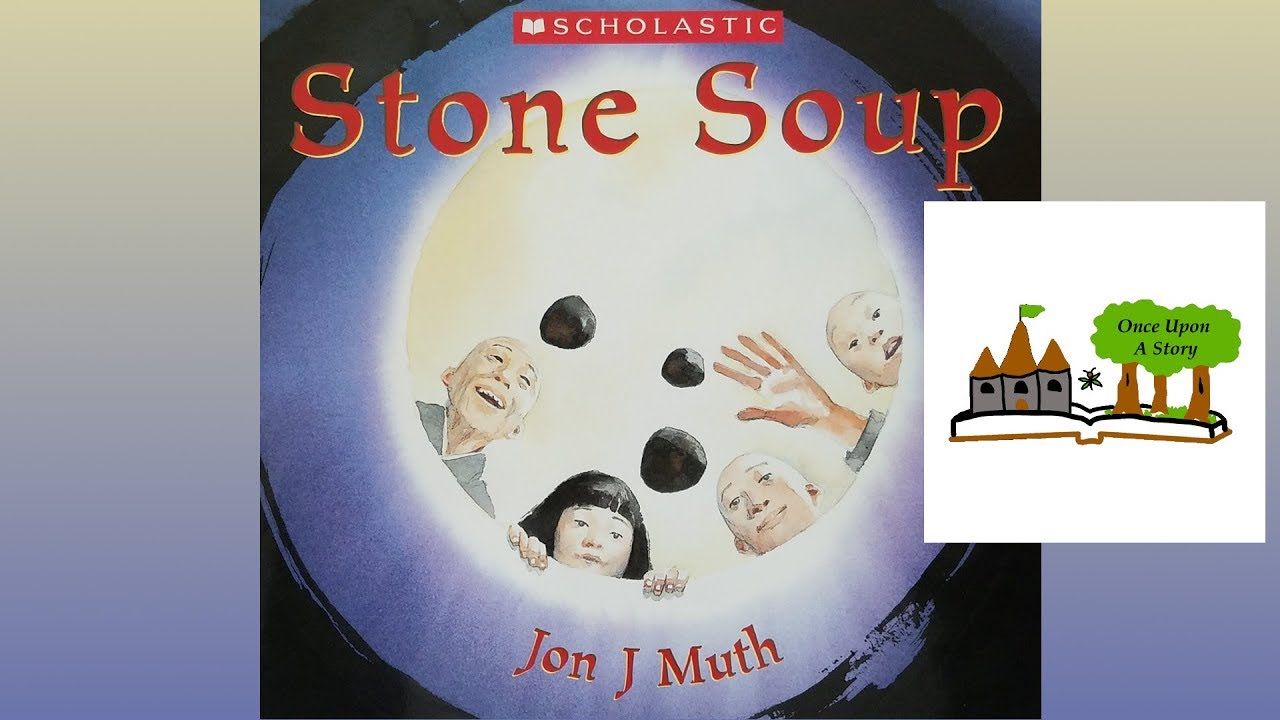 The story of Stone Soup proposes some very interesting philosophical ideas about the nature of happiness and sharing. On the outset, the three monks discover a village of suspicious individuals who worked hard but only for themselves. Due to war, famine, and flooding, these people had become highly introverted and dared not to even answer their doors when the monks came knocking. To this one monk states, These people do not know happiness. Here we have reached a philosophical issue of what it truly means to be happy. The monks have developed an idea of what they feel is happiness and decide that they should impart this definition of happiness upon the village people. This definition is that sharing and communitarian practices such as cooperation bring about happiness and thus should be seen as ethical. To convey their opinion, the monks set about an exercise in sharing that they refer to as stone soup.

As the monks encourage the people of the village to share, they are supposedly giving them happiness. This seems to indicate that sharing creates happiness on one level or another. The idea that sharing brings about happiness is the basis of the monks actions. So is happiness what makes an action ethical? If so, why should sharing make us happy?