According to legend, back in 1994 Bowling for Soup was formed one evening over a few too many Zimas. While most people forget things they do, say, or promise after having too many malt beverages , fortunately for the rest of us they didnt forget, and spent the next two and a half decades cranking out one punk-pop jam after another and amusing their fans and roasting each other between songs during their live performances. Their music videos over that period mirrored the dont take this too seriously, were just having fun vibe of their persona and most of their music. And of course, they became and still are, The Greatest Band Evertm. So in 2019 it was time for a 25th Anniversary show at Lava Cantina.

Lava Cantina was booked for 3 days to accommodate the celebration, including 90s alumnus The Nixons for Friday night. The big BFS concert on Saturday night, and Brunch with Bowling for Soup would follow on Sunday. Jerry/Iceberg snagged tickets early when they went on sale, fortuitously as the concert quickly sold out, one of only 9 sellouts in Lava Cantinas history. However, a last-minute trip to Austin intervened so his tickets were bequeathed to yours truly. I grabbed my camera and tickets and went to Lava for Friday and Saturday night.

Brunch with Bowling for Soup

Be the first to get notified

If somebody lists a ticket using your link you’ll get a personal invite to buy before anybody else.

You have auto-purchase enabled. Share your wanted link to get tickets

If somebody lists a ticket using your link you’ll instantly buy their ticket.

Don’t get short changed. Sell your Bowling For Soup tickets fast and fair.

Tixel’s Safe Scan can instantly detect fakes and dupes, verifying the authenticity of every Bowling For Soup ticket before it goes on sale.

When will I receive the tickets?

We will send you a confirmation email with the tickets and it’s always possible to download your tickets from your account at My Tickets.

Is buying from Tixel safe?

Yes, Tixel uses modern anti-fraud technology to ensure transactions to Bowling For Soup are safe and secure. To keep things legit, we automatically check all uploaded e-tickets and sellers in multiple ways to prevent fraud.

How do I sell/resell Tickets?

Selling tickets on Tixel is safe and easy. List your ticket now.

What events can I sell tickets to?

You can sell tickets to Bowling For Soup or any event with electronic tickets.

Is this your event? 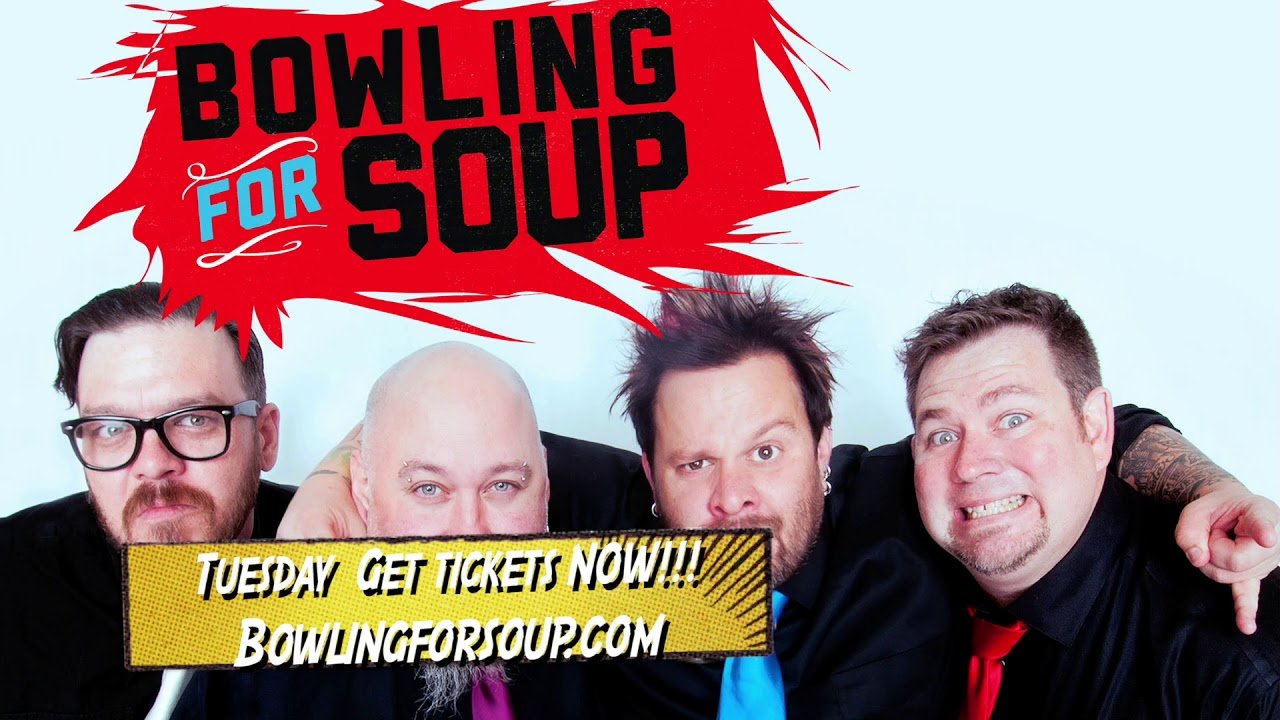 About Bowling For Soup Lava Cantina The Colony Tickets

RedHotSeats is a great place to get tickets for your favorite events.

The Bowling For Soup seating chart generally consists of general admission floors with reserved seating available in the balcony of some venues. Previous venues that have hosted Bowling For Soup shows include the 2000-standing room College Street Music Hall in New Haven, the 3,119-capacity Tower Theater in Oklahoma City and Meadow Brook Amphitheatre in Rochester Hills, which holds 7,700 fans.

Grab your Bowling For Soup tickets to see your favorite pop-punk band live! Part of a wave of tongue-in-cheek, skate-boarding, punk-pop bands who swarmed the airwaves in the late 1990s and early Noughties, Bowling For Soup adopted the stance of High School outsiders who refuse to grow old. Lifting their name from a Steve Martin comedy sketch, the band built a keen following around their native Texas with early albums Rock On Honourable Ones!! and Let’s Do It For Johnny , before receiving a Grammy nomination in 2003 for the single Girls All The Bad Guys Want – a Number 8 hit in the UK.

Their biggest success came with fifth studio album the ska-tinged, cartoon punk of Hangover You Don’t Deserve , which reached gold status in the US and produced the college radio hits 1985 and Almost. The band covered their favorite television and film theme tunes on Bowling For Soup Goes To The Movies and returned in 2009 with their seventh studio album Sorry For Partyin’. Still rocking like a gang of frat-boy drop-outs, a huge local following and joyous live reputation keep the party going. Bowling For Soup tickets are a must-have for fans of the band and are available at TicketSmarter!

Bowling For Soup ticket prices will vary based on the demand for tickets in the city, the size of the venue, seating location and the other acts on the bill.

How much are Bowling For Soup tickets?

Bowling For Soup tickets will generally be in the $65 to $75 range for general admission floor tickets. Some shows will have tickets starting as cheap as $42, while the price for larger shows can be around $150.

Bowling For Soup tours frequently across the United States and has annually played 25 to 35 shows over the past several years. They have frequently played with other bands in the pop-punk genre including Simple Plan, Less Than Jake and Sum 41. Venues like The HiFi in Dallas and the Anchor Rock Club in Atlantic City will hold 650 to 1000 fans for Bowling For Soup shows.

In 2022, Bowling For Soup will play 3 shows around the country. Bowling For Soup’s next live concert will take place on February 18th, 2022 at 7:00pm. Be there to see the band perform live at the The Wonder Bar – Asbury Park at 1213 Ocean Avenue, Asbury Park, NJ. Jaret & Rob Of Bowling For Soup tickets to this show start at $48.00 and go up to $49.00 a ticket. Place your order now because there are only 19 tickets left for this performance.