A few minutes prep time and dinner will be waiting tonight!

I love the ease of a slow cooker for the busy weeknight meals. Whats even better than the help of a slow cooker is products that are healthy, but already prepped for you. This makes getting your recipe ready even quicker.

Simply Potatoes makes slow cooker recipes a snap. All you do is cut open the bag of Simply Potatoes Shredded Hash Browns and add them to your recipe. Theres no peeling, slicing or dicing. The potatoes are recipe ready!

Bonus, Simply Potatoes are made from fresh potatoes and never frozen. You can taste the freshness and flavor really shines through in this recipe.

Hash browns are one of my familys favorite foods. We enjoy them for breakfast and in casseroles.

While youre here, check out these soup recipes.

Jamie here! Its supposed to get down to a chilly 32 this weekend here in East Tennessee, guys. Im talking about some lounging on the couch, wool socks on my feet, bowl of soup in my hands, watching Back to the Future with the family kinda weekend. To that end, I plan to get a crockpot full of cheesy potato goodness ready for the man-herd!

NOTE: I posted my favorite cheesy potato soup recipe once before but Ive adapted it for the slow cooker so you can make it on busy days. My family told me it was the BEST which well chalk up to the fact that Velveeta was present.

The recipe below is the most basic but there are optional extras you can use to make it even BETTER. .

For the crock-pot version of this soup put all the solid ingredients, including bullion cubes, into your crockpot. Pour in the water and the cream soups, and set it on High for 4 hours, or Low for 6-8. SO EASY!!

Helpful Hint: I put my Velveeta in at the beginning, but I almost think it wouldve been wiser to melt it in the microwave and add it at the end . If you use slow cooker bags though, this probably wouldnt even be an issue

Slow cooker potato soup is a cheap and easy dinner to toss together in minutes. Turn your slow cooker on and let it cook away.

Sometimes I dont want to prep russet potatoes and peel them, so having my hashbrown slow cooker potato soup recipe I can get the same flavor in a fraction of the time to prep a classic soup.

Q: Can I substitute other frozen potato products, like hashbrowns?

A: Stick with the Potatoes OBrien for this recipe. The potatoes are diced into small bite size pieces that work great and the peppers and onions add flavor!

Q: Can this Potato Soup be Frozen?

A: Yes! All of the ingredients are freezer-safe! Just store in an air tight container in the freezer. Then, thaw overnight and warm on the stove top until it is too temperature. Be careful not to overcook.

Q: Can I add in other ingredients?

A: Of course! Feel free to add additional fresh or frozen vegetables or meat. Make sure any meat products are already precooked before adding to the potato soup.

HEAD OVER TO SEE EVEN MORE FAST AND EASY DINNER RECIPES THAT WILL BE AN AMAZING PART OF YOUR RECIPE COLLECTION!

CONNECT WITH A MOMS TAKE ON YOUR FAVORITE SOCIAL CHANNEL FOR MORE RECIPES!

You can find us on: 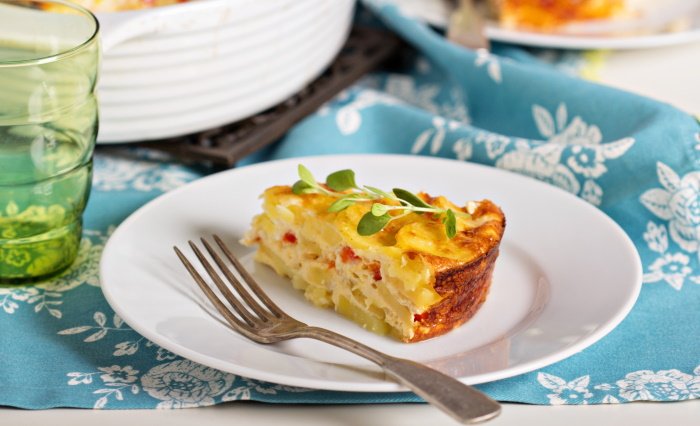 Note: This post may contain affiliate links for your convenience. You can read my full disclosure policy here.

Since Ive already professed my love for Olive Garden soups, lets talk about my affection for Panera soups. I love their chicken and wild rice soup, their chicken noodle soup, and their baked potato soup.

Because, lets be honestthere is not much in this world that is more comforting than a hearty bowl of hot soup in a bread bowl or with a baguette.

So, naturally, in my quest to make more of our meals at home, I began learning how to make homemade versions of many of my favorite soups. First, I started making stove top or slow cooker versions of these yummy soups.

Later, when I bought my Instant Pot, I began converting many of those recipes to be made in the pressure cooker. It was a lot faster that way, and more hands-off .

Potato soup was one soup I hadnt yet converteduntil now.

Related: Check Out the Best Instant Pot Soupsand How to Make Soup from Leftovers

Not that making soup in the slow cooker is difficult, but it requires more time . With the Instant Pot, this soup cooked up in minutes, and it is amazing!

How To Make Cheesy Potato Soup In The Slow Cooker

How To Make Baked Potato Soup

For full details on how to make baked potato soup see the recipe card down below.

This hash brown potato soup is hearty, filling, and has a mild flavor. Its great for sick days, its kid friendly, and can easily be customized with toppings or add-ins to make everyones bowl of soup unique.

I like to put out a toppings bar with potato soup, so that everyone can customize their soup with their favorite ingredients. Here are a few ideas:

You May Like: How To Make Onion Dip With Soup Mix

You May Like: Chicken Pot Pie With Cream Of Chicken Soup And Pillsbury Pie Crust

How Do You Make Potato Soup With Frozen Hash Browns

Start by sautéing the onion in the same pot you will cook the soup in.

Using an immersion blender, blend the soup until it is thickened with a few chunks of potato remaining . This will give you a thicker, smoother soup. Remove blender.

Add all of the cheese except the portion reserved for garnish. Heat, stirring frequently, until cheese melts. Season with salt & pepper to taste before serving garnished with remaining cheese and chopped green onion.

Serve in bowls or crocks and garnish with shredded cheddar cheese and green onion.

Put the hashbrowns in the Crock PotAdd in the chicken broth , cream of chicken soup and half of the bacon bitsCook on low for atleast 7, up to about 8 hours, or until potatoes are tenderAdd salt & pepper to tasteAbout an hour before serving, add the cream cheese to the slow cookerMix a few times throughout the last hour of cookingOnce the cream cheese is mixed in, the soup is ready to serve.Top with bacon bits and cheddar cheese.Enjoy! 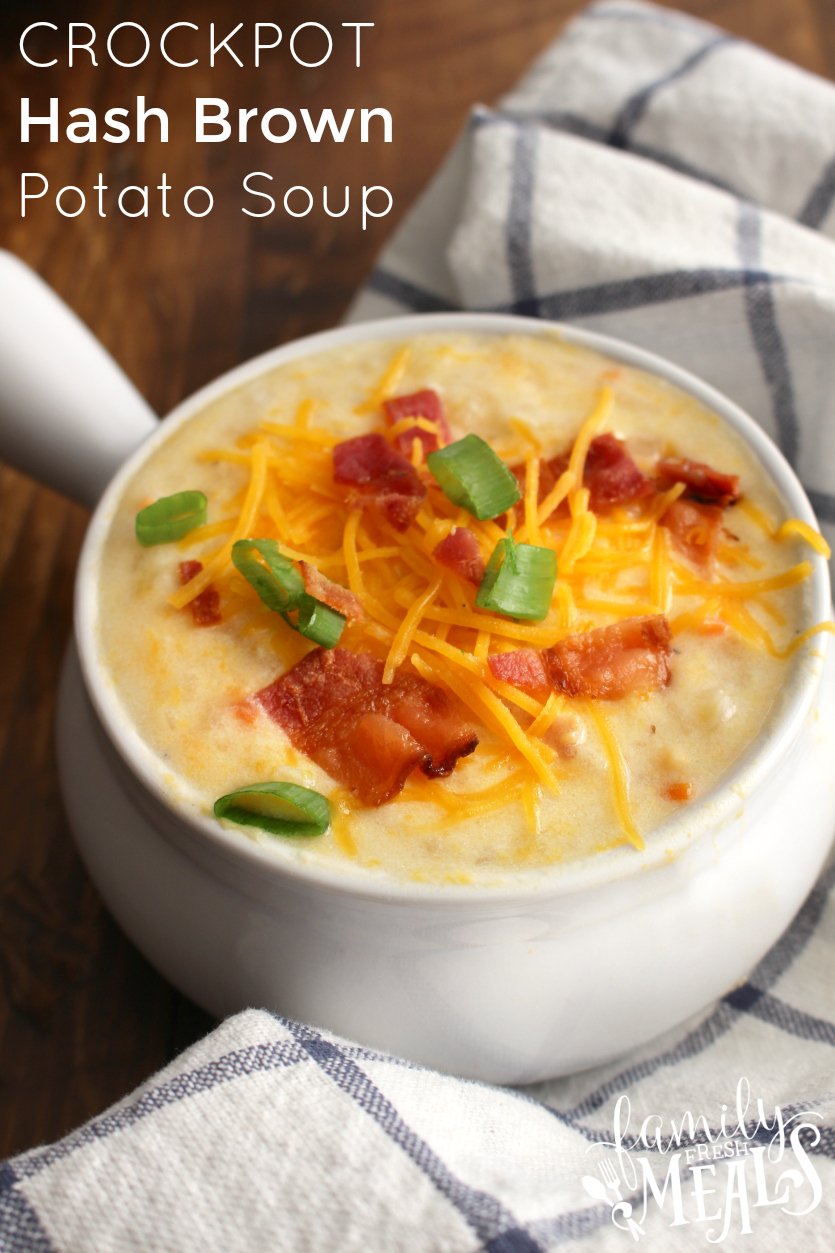 Don’t Miss: What Seasoning Is In Lipton Onion Soup Mix

What Type Of Hashbrowns Are The Best For Potato Soup

I typically use frozen, shredded potatoes for this recipe, but you could absolutely make this soup with the shredded potatoes that you find in the refrigerated section of the grocery store. You could even shred fresh potatoes if you wanted to.

Use a kitchen scale to measure 20 ounces or just eyeball it. Theres nothing wrong with adding a little extra potatoes into this recipe.

This recipe is extra EASY, because its made with frozen hash browns! No washing, peeling, and cubing potatoes in this recipe. Winning.

You can make this easy potato soup even heartier by topping it off with crumbled bacon, more sautéed carrots, and some salty crackers. The salt from the bacon and the crackers means you dont need to add too much extra salt to the soup. The flavors just blend together so beautifully, the perfect soup for any chilly day.

I love soups of all types and flavors, but this one is special. Easy, delicious, and packed with unique flavors. Im telling you, those carrots are the secret weapon!

How Do You Make Egg Drop Soup

How Can I Add Flavor To Potato Soup

This potato soup gets a lot of flavor from the cooked crumbled bacon and the cheese. However, you can also add in some extra ingredients to get even more flavor if you want.

Here are some ideas to consider:

Pepper Jack Cheese I used cheddar cheese, but to get a little bit of spice, use Pepper Jack. Its incredible.

This is a super easy and delicious soup from a restaurant called The Market Place. Using precooked or leftover bacon is a time-saver. I use light sour cream and light Velveeta for less fat content. Note that butter is optional, but sour cream a must. Enjoy!

CREAM OF CHICKEN SOUP: 1 can of cream of chicken soup.

CORN: 1 package of frozen corn. You can also use canned corn or fresh corn.

BACON: I like to sprinkle some cooked bacon pieces on top of the soup.

GREEN ONIONS: Add a couple of green onions as a topping too.