Low Sodium Cream of Chicken soup is a must to make to stay within our sodium limits for a low sodium diet. Many recipes from soups, casseroles and other dishes use it as a base for the recipe. The great thing about this recipe is it is so easy to make from just a few basic ingredients. And if youre making a quick soup just add some diced chicken, celery and carrots and your favorite no salt seasonings. This recipe comes together in just a few minutes and you can ditch loads of sodium.

If you would like to have a mushroom condensed soup be sure to see my Low Sodium Cream of Mushroom for your casseroles or other recipes!

Get The Right Texture

What if its too thin / thick?

How to keep from getting lumpy? The lumps in your soup could be from flour not being properly incorporated. This can be avoided by creating a flour slurry that you add to the stock. Take your flour and start adding the milk from your recipe until it forms a slurry. Mix your flour and milk until there are no lumps. Then add this slurry to your stock as well as any extra milk.

Is Cream Of Chicken And Chicken Broth The Same

If you dont have other condensed soup options on hand or the time to make a homemade alternative, you can simply use sour cream or plain Greek yogurt with added seasonings.

Add these to your dish to mimic the creaminess and consistency of cream of chicken soup. 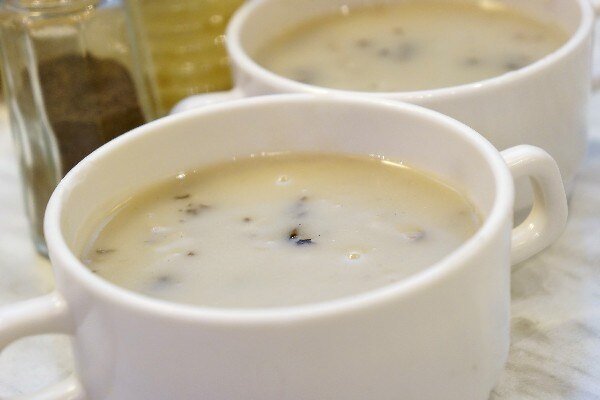 When storing soup, make sure it is cooled down to not warm up your fridge. Place the cooled soup in an airtight storage container in the refrigerator for up to 4-5 days.

You can reheat soup in a covered saucepan on the stove over medium-low heat until hot. But who has time for that? Just heat the chicken noodle soup in a microwave-safe bowl in the microwave for about two minutes. Stir halfway through the time. You may need to add a little more broth or water as the noodles will have continued to soak up the broth when stored.

If you freeze the soup it is best to portion it into serving size airtight freezer containers. You wont have to thaw a big block of soup unless you plan on that for later. Store for up to 3 months and then let thaw overnight in the refrigerator before reheating.

To make this awesome Instant Pot low sodium soup I used my 6 quart Instant Pot LUX60V3 6 in 1 . The Instant Pot multi-cooker, combines 6 kitchen appliances in one, pressure cooker, slow cooker, rice cooker, sauté, steamer, and warmer. This Instant Pot is one of the very few appliances that stay on my counter since I use it several times a week. Its super easy to use and clean.

A few of my other great soups to enjoy!

This method will make you the equivalent of one can of cream of chicken soup. You can split this into as many servings as you desire.

You should use 1 cup of this recipe to replace a 10.5 ounce can of cream of chicken soup. This recipe makes around two cans worth of soup, so you can store the other half away for a later date.

You can see from the nutritional information of this recipe that it is much healthier than canned cream of chicken soup. The calories are decreased as well as the total sodium.

Whats more, the amount of fat in the soup is much less than our other substitutes as well.

Here’s yet another “cream of” soup that you may just find in the back of your pantry, and it can serve as a stand-in for cream of mushroom soup in your recipe. According to the ingredient list available on the Campbell’s Soup website, this soup is made with sugar, dried onions, and mustard flour: it results in a savory, creamy base, with flecks of broccoli pieces.

When looking at your recipe and considering whether cream of broccoli soup will work well, keep in mind that Produce Made Simple says broccoli pairs especially well with other veggies like bell peppers, potatoes, onions, and spinach. It’s also delicious with cheddar and parmesan cheeses, in egg dishes, and in stews and pasta dishes. It also adds a little dash of green to the dish! As far as measurements go, use an equal amount of cream of broccoli soup as your recipe calls for of cream of mushroom.

Using As A Substitute For Condensed Soup

Dont Have These Ingredients

Weve been talking about these substitutes as though you have all of these ingredients in your kitchen, but what if you dont have a vital component?

If you dont have cream of chicken soup already for your casserole or other recipe, youre not going to want to go to the store for ingredients to make a substitute.

Alternatively, you might simply not want to make your own soup to put into your recipe. Were all about an easier life, right?

Making your own soup increases the cleanup time, as well as the time taken to make the dish overall. This doesnt appeal to everyone.

So, can you substitute cream of chicken soup for single ingredients that you might already have in your pantry? Or is it essential that you obtain a soup, either from the store or by making one?

Below are a number of single ingredients that you might have in your pantry, along with our advice whether you can use them for a cream of chicken soup substitute or not.

Sodium In Canned Cream Of Chicken

The famous name brand cream of chicken soup I looked at is loaded with sodium at nearly 870 mg per ½ cup. And since most recipes call for an entire can thats adding 4350 mg of sodium to your recipe from just one can!! Sometimes you just have to shake your head as you wonder why there is so much sodium in our canned foods. With this Low Sodium Cream of Chicken condensed soup having just 44 mg of sodium you no longer have to avoid all the wonderful casseroles and soups. Being able to use this recipe as base ingredient called for in so many other recipes opens up a wide range of possibilities that were shut out when using condensed cream of chicken.

There are two ways to make you low sodium condensed cream of chicken. One is by making a roux which is cooking butter and flour for you thickener. This is the way I make it as I think it adds a fuller richer flavor. But if youre watching fat consumption also, you can replace the butter with olive oil for a healthier fat content. Or for the least amount of fat, just leave the butter out. Then add the flour to the liquids and cook as described. I have always made it with the butter though because I prefer a richer fuller soup.

I use this recipe as a substitute for the canned cream of soups in recipes. I almost never keep that stuff on hand, because its full of sodium, and just yucky. The recipe calls for chicken broth. I use chicken broth for the cream of chicken soup substitute. To make a heartier soup, like the cream of mushroom, I use beef broth. Sometimes I like to add in a little shredded chicken, sliced mushrooms, celery, etc. Use your imagination. I’ve never tried this soup by itself, I only use it in recipes, and its a great substitute!!! The recipe always tastes better than when I use the canned stuff. Enjoy!

More About Substitute For Cream Of Onion Soup Recipes 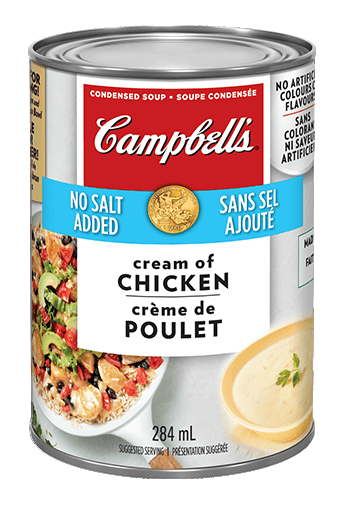 Next time instead of reaching for that can try this homemade condensed cream of chicken soup instead! Its made with simple ingredients, tastes so much better, and can replace the canned version perfectly!

I couldnt make homemade condensed cream of mushroom soup without making a cream of chicken soup! And this version is just as good too!

These are great recipes to keep in your back pocket for when you are in need of a can but ran out, or if you are looking for a healthier version of those cream of x soups!

This chili is effortless to make in the crockpot with only a few simple ingredients. To make the chili, place some boneless chicken breasts in the slow cooker. Add chili beans, black beans, Rotel diced tomatoes and green chiles, cream cheese, ground cumin, chili powder, chicken broth, buffalo hot sauce, and ranch dressing mix. Cover the slow cooker and cook on LOW for about 6 hours. Remove the chicken breasts from the crock pot and shred with 2 forks. Add the chicken back to the slow cooker, stir, and serve.

How Do You Make Cream Of Chicken Soup From Scratch

There are many tried and tested ways of making cream of chicken soup. Heres a basic version that can be easily altered to suit you:

This is just a basic recipe, if you want to add more flavors and textures add in some cooked chicken pieces and vegetables such as leeks, carrots or celery and season with parsley.

How to make Low Carb Cream Of Mushroom Soup

There are so many great ways to use this substitute cream of chicken soup! Add about 1 1/4 cups of milk, chicken broth or water to the base to turn it into soup. From there, you can add shredded chicken, vegetables or other toppings to make it a complete meal . It also makes a great addition to casseroles, such as Chicken and Rice Casserole. We also love it for entree dishes, with Creamy Italian Chicken or Chicken & Mushroom Alfredo.

How To Make A Bchamel

In a small sauce pan, melt butter over medium low heat. Add flour to the pan, and whisk together to make a roux

Add the liquids chicken broth and milk, and whisk together to smooth out the lumps. Note: True béchamel uses only milk for the liquids. We are adding the chicken stock/ broth for that chicken flavor.

See recipe card below this post for ingredient quantities and full instructions.

Melt butter in a saucepan over medium heat. Let it fully melt and begin to foam. This allows the water in the butter to cook off which will create a smoother consistency.

Gradually sprinkle in the flour and whisk continuously for 3-5 minutes to cook off the raw flour taste. It will become the consistency of wet sand.

Remove from heat. Add 1/3 of the chicken broth, whisk well. Whisk in 1/3 more, until combined. Finally, whisk in the rest. Temper the milk by microwaving it for 45 seconds, slowly add it to the saucepan and whisk to combine.

Add the seasonings. Add to medium-high heat to thicken it back up.

Whisk continuously as it increases in temperature and reaches near-boiling point. It will become very thick. Remove from heat immediately once its thickened. It will thicken even more as it sits.

PRO TIP: Run the mixture through a fine mesh strainer to make it super smooth, just like a can of condensed soup.

This strainer is also a perfect tool for making homemade chicken stock, or to run oil through if you want to reuse it after making a batch of fried chicken or french fries. Its a great investment in the kitchen.

Read Also: How Much Is Endless Soup And Salad At Olive Garden

How To Lose Weight Eating Soup