Sodium In Canned Cream Of Chicken

The famous name brand cream of chicken soup I looked at is loaded with sodium at nearly 870 mg per ½ cup. And since most recipes call for an entire can thats adding 4350 mg of sodium to your recipe from just one can!! Sometimes you just have to shake your head as you wonder why there is so much sodium in our canned foods. With this Low Sodium Cream of Chicken condensed soup having just 44 mg of sodium you no longer have to avoid all the wonderful casseroles and soups. Being able to use this recipe as base ingredient called for in so many other recipes opens up a wide range of possibilities that were shut out when using condensed cream of chicken.

There are two ways to make you low sodium condensed cream of chicken. One is by making a roux which is cooking butter and flour for you thickener. This is the way I make it as I think it adds a fuller richer flavor. But if youre watching fat consumption also, you can replace the butter with olive oil for a healthier fat content. Or for the least amount of fat, just leave the butter out. Then add the flour to the liquids and cook as described. I have always made it with the butter though because I prefer a richer fuller soup.

Low Sodium Cream of Chicken soup is a must to make to stay within our sodium limits for a low sodium diet. Many recipes from soups, casseroles and other dishes use it as a base for the recipe. The great thing about this recipe is it is so easy to make from just a few basic ingredients. And if youre making a quick soup just add some diced chicken, celery and carrots and your favorite no salt seasonings. This recipe comes together in just a few minutes and you can ditch loads of sodium.

If you would like to have a mushroom condensed soup be sure to see my Low Sodium Cream of Mushroom for your casseroles or other recipes!

Can I Freeze Cream Of Chicken Soup

You can absolutely freeze cream of chicken soup.

To freeze cream of chicken soup, pour the cooled gluten free chicken soup into freezer bags and squeeze out all the air.

Lay flat and freeze until solid, and then you can position your frozen cream of chicken soup wherever youd like in the freezer.

To Use Frozen Cream Of Chicken Soup 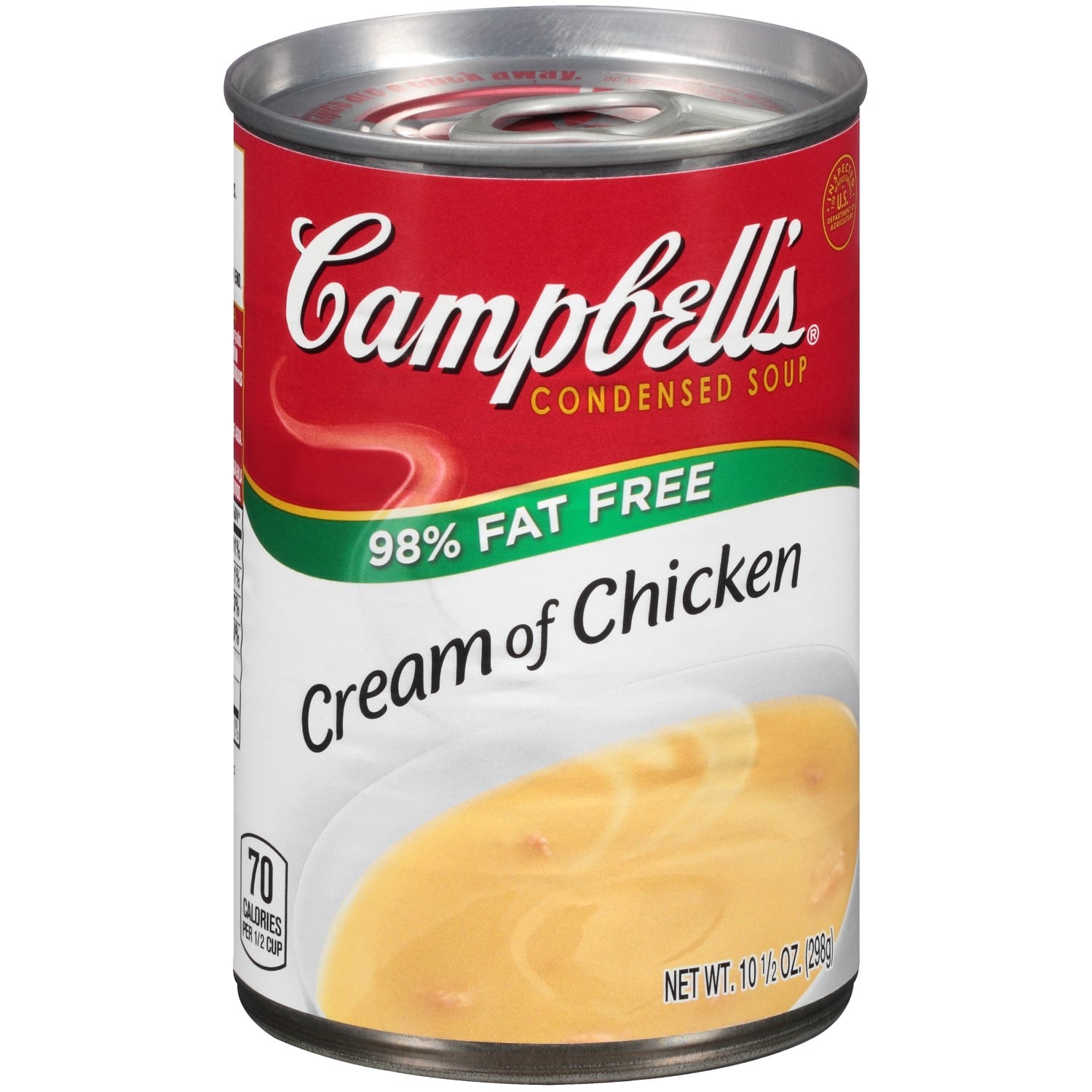 Let your frozen gluten free chicken soup thaw completely before using. You can move it to the fridge to thaw if you have 8-24 hours.

If you need to quickly thaw your gluten free chicken soup, place the freezer bag in a bowl with cool water.

Once your gf chicken soup has thawed enough to remove from the freezer bag, place the frozen GF chicken soup in a microwave safe container and heat at 50% power in 30 second increments until thawed.

This recipe is so easy, and it adapts to fit any dietary needs.

Sometimes when I make this Ill make a larger batch when I know I will be making a few meals requiring it in the future. I then pour the soup into a large muffin tin and then freeze it. When frozen simply pop them out and put them into a Ziploc bag and put them back in the freezer.

Then you can put it in a pot on low to thaw and warm it up. It may separate a little but just stir it back up a bit and Walah! You can then use it as a soup or incorporate into another dish.

How To Make Dairy Free Cream Of Chicken Soup

To make it dairy-free, just use olive oil instead of the butter and use a dairy-free milk .

How do you make vegetarian cream of chicken soup?

You can also make a vegetarian substitute for cream of chicken soup by using vegetable broth and omitting the chicken.

This is such a good recipe to have handy! You’ll find places to use it all the time.

It only takes 5 minutes to make your own gluten-free cream of condensed soup, and now you are not limited by condensed soup containing recipes.

You can also use this gluten-free cream of chicken soup recipe when another recipe calls for a roux and cream sauce, like Christina’s King Ranch chicken for two.

What recipe are you going to try your homemade gluten-free cream of condensed soup in first?

CaribSea, Freshwater, Super Naturals, Amazon weighs 1 521.75 kg/m³ with specific gravity of 1.52175 relative to pure water. Calculate how much of this gravel is required to attain a specific depth in a cylindrical, quarter cylindrical or in a rectangular shaped aquarium or pond

Volume to weight, weight to volume and cost conversions for Refrigerant R-23, liquid with temperature in the range of -95.56°C to 4.45°C

One millisecond is defined as a period of time equal to one thousandth of a second.

The length measurement was introduced to measure distance between any two objects.

What Can You Make With Gluten Free Cream Of Chicken Soup

A few months ago my sister-in-law called me because she was making dinner for a friend who had a kiddo with a gluten-intolerance and wanted to know what she could substitute for canned cream of chicken soup.

I’ve been thinking about developing this recipe ever since.

You can make any flavor that you want by sautéing chopped mushrooms, celery, or cooked chicken in the butter before adding the rice flour.

Most canned cream of chicken soups in the store are not gluten free.

Is Campbells cream of chicken soup gluten free? Absolutely not!

We are lucky to have a few gluten free canned cream of chicken soups at our grocery stores, but I still prefer making my own most of the time.

Luckily, making your own cream of chicken soup is quick and easy!

Can You Make Cream Of Chicken Soup Gluten Free

So many recipes call for canned condensed cream of chicken soup, celery or mushroom soup. So many!

Easy, family favorite casseroles often call for canned condensed cream soup, which is a problem when you have to eat gluten-free or dairy-free, because canned cream condensed soup has both.

Canned cream of condensed soup also has a lot of fillers, preservatives, MSG, and other junk that it is nice to avoid.

There is an easy, healthy substitute for canned cream of condensed soups.

Just make your own! It really only takes 5 minutes to make.

How Do You Make Gluten Free Cream Of Chicken Soup

First, saute your chicken in the oil or butter.

Even if you uare using already cooked chicken, this will help to flavor your cream of chicken soup.

Youre still making a blonde roux, and not cooking it to a dark brown color.

Cooking the flour keeps your cream of chicken soup from tasting like a floury paste.

Then add the broth and milk and bring it to a simmer.

Let it simmer until thickened,

It will thicken up even more as it cools.

Now your gluten free condensed cream of chicken soup is ready to use in all your favorite recipes!