Store bought cream of mushroom soup is not usually gluten-free, as its thickened with wheat flour, not to mention filled with hidden carbs and preservatives.

This cream of mushroom soup without flour doesnt need any flour or xanthan gum to thicken it, its thick enough on its own, thanks to the cream and pureed mushrooms.

Can This Be Used As Condensed Cream Of Mushroom Soup

Condensed cream of mushroom soup is quite a bit thicker than this soup. So I wouldn’t use it as a true substitution.

However, you can try making a much thicker, more condensed version by NOT ADDING the broth/stock. I’ll leave it up to your judgment if it’s thick enough.

You can also add a cornstarch slurry.

Can I Freeze Mushroom Soup 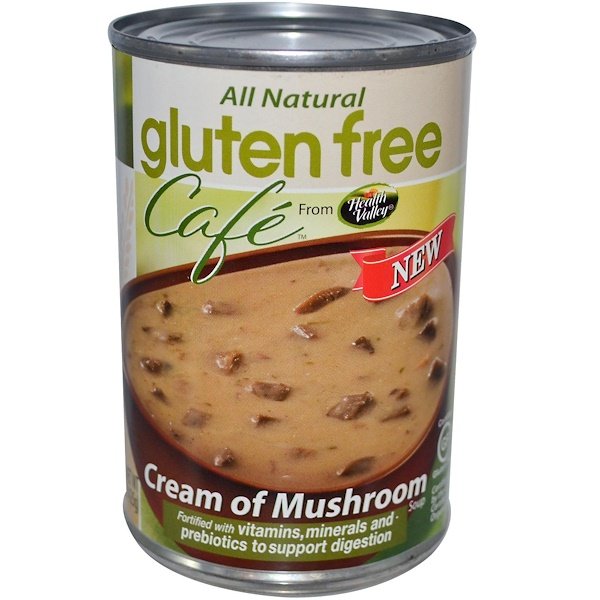 Of course! There’s nothing better than having a supply of this tasty mushroom soup recipe waiting to be heated up.

Next time you make this delicious soup, you may want to double the recipe to freeze half for later.

1. Store the soup. You can pour the soup into freezer-safe food storage containers.

Some people also like freezing soup in gallon Ziploc freezer bags. This can be a bit tricky to do. But then you can stack the frozen soup, which saves space.

To pour the soup into the freezer bag, place the bag in a bowl. Then cuff the bag over the edge of the bowl. Ladle the soup into each bag.

Then carefully press out any air. Seal up the bag.

Remember to label and date the containers or bags with a Sharpie.

2. Freeze the soup. Stack the containers or lay the Ziploc freezer bags flat in a single layer in the freezer. After the bags freeze, you can then stack them to save freezer space.

The soup should remain good for at least three months.

3. Thaw and reheat. To thaw, defrost the containers overnight in the refrigerator.

Another way to thaw the frozen soup is to place the containers or freezer bags in a large bowl full of room temperature water. The soup should thaw in a few hours.

Then you warm the soup up on the stovetop over medium heat or microwave it.

Ingredients For Making This Gluten

How To Use This Substitute For Cream Of Mushroom Soup

Use the soup in the same recipes you would use the cannedvariety in. It acts like the condensed version in the store. The substitute isa little thicker and takes a little more mixing into recipes than the cannedvariety does. Now youre one step closerto making casseroles, crockpot recipes and more like those that eat gluten.

Homemade cream of mushroom soup tastes so much better than the variety wrapped in aluminum and is also much healthier!

The soup can be served alone as a meal, or you can use it to add to any recipe that calls for cream of mushroom soup in the ingredient list.

The soup can be made from start-to-finish in about 20 minutes. Add a side salad and youve got a well-rounded meal in no time!

How To Reheat Gluten Free Cream Of Mushroom Soup

I prefer using a GF all-purpose flour blend rather than a single flour like almond flour. This type of blend has rice flour, xanthan gum, potato starch, etc. so it thickens the soup up just right.

Chicken broth: Make sure the broth you’re using is also certified as gluten free on the label.

Many chicken stock and broth brands may have hidden sources of gluten, so always check.

You May Also Like These Gluten Free Soup Recipes

If you like this recipe don’t forget to leave a 5 star rating and let me know how it went in the below comments, I love hearing from you! You can also FOLLOW ME on , , , and to see all my delicious recipes.

How To Make Gluten Free Cream Of Mushroom Soup

To Use Frozen Gluten Free Cream Of Mushroom Soup 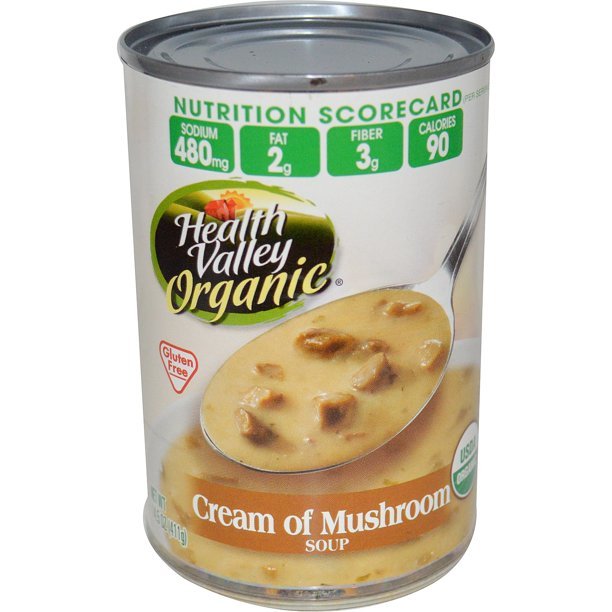 Let your frozen gluten free mushroom soup thaw completely before using. You can move it to the fridge to thaw if you have 8-24 hours.

If you need to quickly thaw your gluten free mushroom soup, place the freezer bag in a bowl with cool water.

Once your gf mushroom soup has thawed enough to remove from the freezer bag, place the frozen GF mushroom soup in a microwave safe container and heat at 50% power in 30 second increments until thawed.

How To Make Condensed Gluten Free Cream Of Mushroom Soup

Cream of mushroom soup is a thickened cream-based mushroom soup made with a roux, made with flour and fat . You begin by cooking the vegetables until theyre soft and fragrant.

Remove some cooked mushrooms. Well add those back into the soup when its nearly done, and smooth.

Then, make the roux by melting butter and cooking it for about 1 minute with superfine white rice flour, freshly ground black pepper, and some salt. It will clump up, so keep whisking.

Add the liquids: vegetable stock, and evaporated milk. The roux will thicken them as it cooks.

Keep cooking the mixture so some water evaporates. This will concentrate the flavor and thicken the soup even more.

Then, puree all the soup until super smooth. I like to use an immersion blender since the liquid is hot, so a standing blender will spurt and splatter the soup if you use it with hot liquid.

Then, add back in the reserved mushrooms, and serve hot!

The links on this website may contain affiliate links. Please read my disclaimer for more information.

Condensed Cream of Mushroom Soup. Its a popular ingredient in casseroles, crock pot recipes, and other one pot meals. Both the red and white label and private label options are easy to find and relatively inexpensive. Unfortunately, those brands dont work with a gluten free diet. The Gluten free versions available are few and far between and expensive. Make a Cream of Mushroom Soup Substitute at home! Its easy, inexpensive and works great for those casserole and crock pot recipes!

Is Cream Of Mushroom Soup Keto

No, traditional cream of mushroom soup is not keto. Most versions are made with flour, cornstarch, and other non-keto ingredients that add carbs to the soup. Carbs in cream of mushroom soup canned varieties typically clock in at 8 grams per cup, which isnt outrageous, but because of those starches, it can still spike blood sugar and kick you out of ketosis.

Instead, make this is delicious option for the keto diet, made with no starches or artificial ingredients. The only carbs in this soup come from the mushrooms and onions. If you want to reduce the carb count further, you can omit the onion. If you reduce the amount of mushrooms, your soup will be thinner and less creamy, so if you feel the need to do that, I recommend adding a thickener .

Yes, cream of mushroom soups typically have dairy in them. And this recipe is no exception.

If you cant have dairy, dont worry! I explain how to make gluten free dairy free cream of mushroom soup in the final section of the post. Its about substitutions and variations.

How To Make Cream Of Mushroom Soup Gluten Free

Add the butter to a large saucepan over medium-high heat.

Once the butter is melted, add the shallots and mushrooms. Cook for 8 minutes, until the mushrooms are tender.

Add the garlic, thyme, salt, and pepper, then cook for 30 seconds more.

Add the broth to the mixture and bring to a simmer. Whisk in the xanthan gum.

Reduce to medium-low heat and cook for 45 minutes, stirring occasionally.

Remove from heat and allow to cool slightly, then process in batches in a blender.

Return the soup to the pot and stir in the heavy cream. Cook for another 5 minutes until heated through.

How To Make Homemade Gluten

Once you have the condensed recipe made, making a warm, comforting bowl of creamy soup is as easy as adding additional milk!

Can I Make A Vegan Cream Of Mushroom Soup

Yes, you can make a vegan and dairy free cream of mushroom soup

Butter: Use a vegan buttery spread instead of regular butter.

Milk, half-and-half, or heavy cream: Use a non-dairy milk substitute like unsweetened soy milk, rice milk, coconut milk, or coconut cream. You can also use unsweetened almond milk if you don’t have a nut allergy.

Broth: Instead of chicken broth, use a vegetable broth or vegetable stock.

Make sure you’re using a brand that is certified as gluten free. 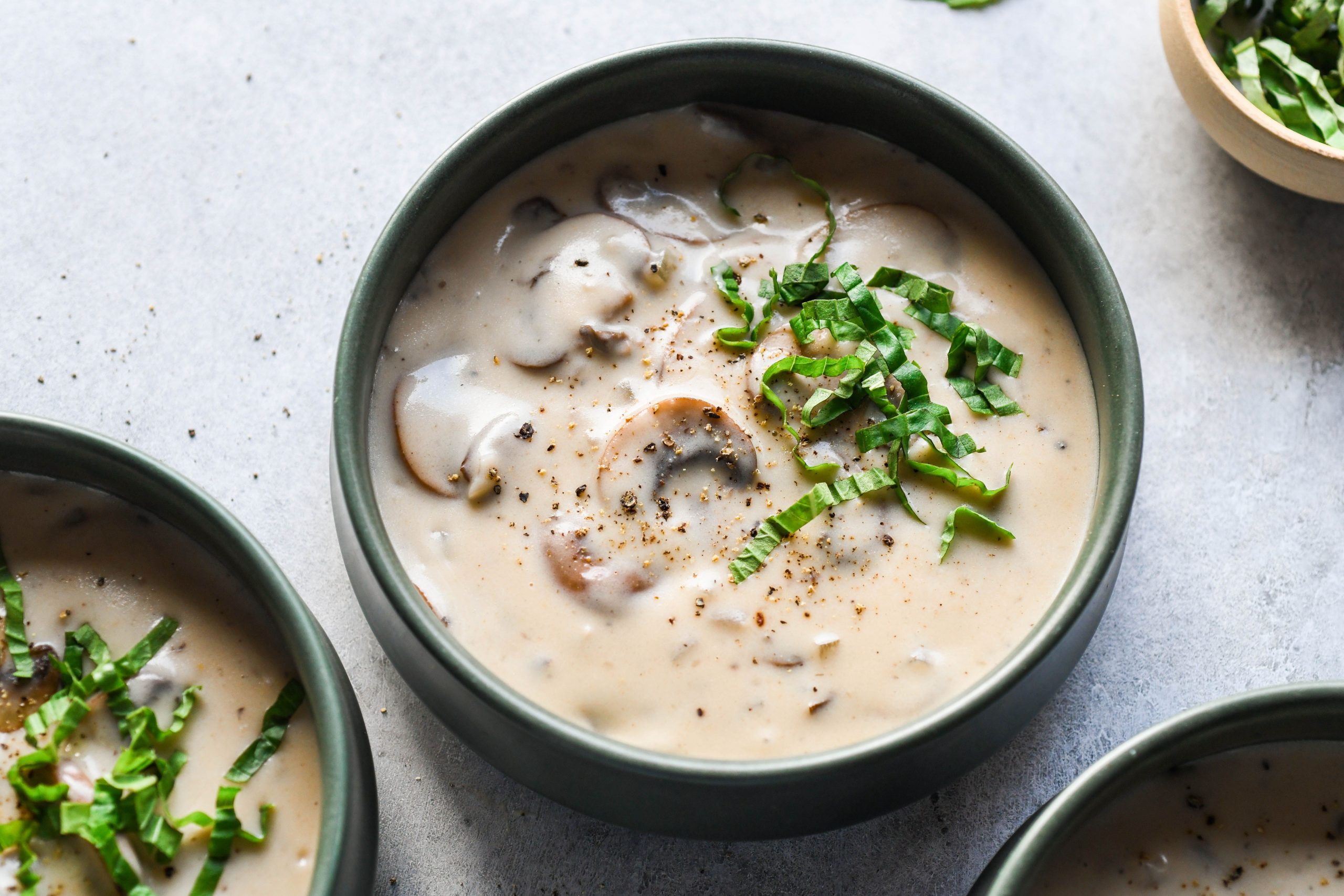 With just 3 ingredients, this Crock Pot pot roast with cream of mushroom soup may be the easiest recipe on the internet. But don’t let that fool you… It is second to none in flavor!

No matter how many times I try to get my extended family onboard with new ideas, it seems as though we’re going to eat the same few foods at get-togethers for the rest of our lives. It used to drive me crazy. But, at this point, it really is a losing battle. And at least we eat REALLY delicious food! More than turkey, ham, or anything else, this roast is everybody’s favorite. And it’s not even close!

The same is true of many gluten free cream of chicken soups.

If you want an easy homemade cream of mushroom soup this is the best recipe!

You may not know, but I actually went to culinary school.

This is how I was taught to make cream of mushroom soup by my chef instructor.

Usually cream of mushroom soup starts with a flour roux.

Can you make homemade cream of mushroom soup gluten free?

The answer is a resounding yes! Be sure to use a gluten free flour and double check the ingredients of your broth.

If you want to enjoy your soup on its own, I suggest adding more milk or broth until it is your preferred consistency.

Whether you don’t like to buy canned soup for health reasons, have dietary restrictions, or just want to try something different, here’s a basic recipe for a Homemade Gluten Free Dairy Free Cream of Mushroom Soup. You can even make it in advance and freeze to use later on!

Soup For My Family Tiktok